“No! Stop. No! No! I can’t believe it!” Joshua put both hands to his face, not believing what he was seeing.

“Must be touching at all times!” he roared with laughter, slapping his leg at the hilarity of Colton, Tami, and Sophie awkwardly clasping each other’s hands, white-knucklingly squeezing out the blood, and slowly making their way down the sidewalk. The Winders were about to come out of hiding, but for real this time. I didn’t see a single duck, but I did see lots of intimidating humans. 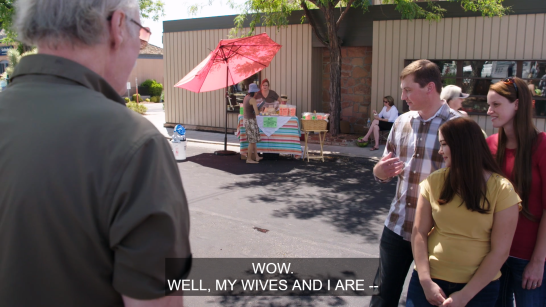 But what started with Joshua’s hysterical laughter ended with both of his wives in tears. Did that just happen? Did the Winders, in the most awkward way imaginable, just tell the cheese vendor they are a plural family?

Part of this scene was shown again and again in the episode previews. We keep seeing Sophie confess to a perfect stranger, “I’m actually my husband’s second wife,” while Colton and Tami stand there nodding like bobble head dolls, and the vendor stares at them, looking quite surprised at what was just revealed to him. 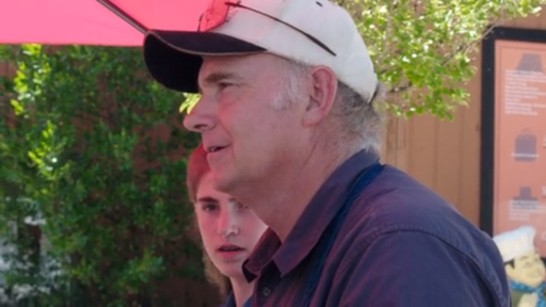 But then… There’s a plot twist that makes this my favorite SSW scene thus far, when the cheese vendor confesses that he, too, is a polygamist with two wives!!!

The shock of that moment dropped my jaw. I did not see that one coming. That was unexpected. That was… Wait. Did that just happen? All I can say is, that was a wonderful tender mercy.

The episode shows all-too-brief excerpts from the conversation, which I would pay money to see in entirety, between the polygamous Winders and the polygamist cheese vendor. I was so touched by it that I starting tearing up. I looked over at my sisterwife Melissa and her face was red with emotion as well. God is so good!

After the episode finished, my sisterwife, our husband, and I discussed it until midnight. Joshua used the word “charming” to describe the Winders and what happened at the farmers market. Melissa called it “endearing.” Words failed me.

The Winders imagined a market full of enemies throwing tomatoes at them, then handcuffing them and putting them in jail. Instead, they ended up making a new friend. It was truly amazing. I loved it.

What did you think? Did you laugh at the awkwardness of going into public and telling perfect strangers they’re polygamists? Were you disappointed there weren’t any ducks at the farmers market? Were you touched by their luck at meeting another polygamist? What’s been your favorite SSW moment so far? Leave your comments below.

My name is Charlotte, and I'm the blog owner. I used to be LDS but now I'm independent of any organized religion. I live in Kody Brown's old house in Lehi, Utah. I've been Joshua's wife since 2002 and Melissa's sisterwife since 2013. View all posts by Charlotte